ALEKOS FASSIANOS (1935 - ) is one of Greece's most popular contemporary visual artists. He was born on 25 October 1935 in Athens, Greece. He trained in music but majored in painting at the School of Fine Arts of the National Technical University of Athens - NTUA (1956-1960), Yannis Moralis serving as his chief instructor. In 1960 he gained a scholarship from the French government to study for three years the art of lithography at Ecole des Beaux-Arts in Paris under the guidance of Ε. Clairin and G. Dayez. At first and for a very brief period, during which he was influenced by the abstract art (1957-1958), Fassianos adopted a very personal style, which now serves faithfully figurative painting. Already in the 60s he formed a specific subject matter, purely anthropocentric, which in the works where human is absent is implied. The specific subject over the years revolved, slowly, into a maximum visual treatise on everyday life.

However, both in the beginning but also later in his career, when his style was ultimately formed, the human figures, the interiors, still lives, and to a more limited extent, the scenery cannot be simply classified as realistic painting. His images do not realistically aspire to give a specific person, an object, etc., but rather to describe situations. Therefore, they were standardized and became symbols of a history: the history of Greek petty postwar society, especially in Athens, which the artist lived as a child and then performed visually by connecting the first with occasional thematic references to mythology and history of the nation, and secondly with permanent formalistic references to ancient painting. This, of course, is valid from the 70s onwards, because at first his forms resembled thick colored caricatures, somewhat like snowmen, and exuded a dose of social criticism, since they were limited to uniformed officers or masters with stylized topper. Morphoplastic indeed, they were related to preliminary figures of J. Dubuffet and, therefore, could not have any connection with ancient Greek art.

In the 70s, the colors of soft shades of pink or bold yellow, ocher and blue gave way to an intense shade scale with emphasis on clear blue and red. His familiarity with the Karagiozis hero of his childhood, is present in the way in which the figures stand in space, ie often and always plain white background, to the related deformation which submits them. The spontaneity of his writing and simplicity, mistakenly identified as childishness, reveal another source of inspiration: the popular painting and especially the art of Theophilos. The immediacy, however, and simplicity that characterize his works are achieved through a completely different approach than that of the shadow theater and folk painting. The painting in his own case consciously sets about the 'artistic' nature in the interests of simplification. Its relation with the "masters" of the 30s Generation, in particular Tsarouchis, and the coincidence of their views intensified the persistence of some elements in his work, without involving any alteration in his style. This is the period where the decorative motifs start to appear and sometimes they are related with the myth of Greekness (cafe tables and chairs, ancient monuments and ruins) and sometimes are related with his personal myth (electric lamps, scarves, cigarettes, bicycles, etc.) . In both cases, the components function as scenography and are mounted as in the Shadow Theatre. They are of great importance, because they basically provide information about the persons and the story which the artist tries to unfold, however, they always remain anecdotal and illustrative and do not take up much space in the painting composition. Each one of his paintings, in addition to a variant of the large daily history, it portrays a time in history. Sometimes it is the Athenian who goes shopping by bike in the neighborhood, sometimes the couple on love in a very ordinary room, other times the rider who goes down with his horse on a beach to play with the waves. The image narrative is so great that sometimes it gives his works a comic character because often viewers are waiting to see the next picture of the history. Gradually the individual static figures have acquired more movement, while the presence of couples is becoming more common. Then again, the human forms are virtually identical from one painting to another, and can no longer be divided apart from two general categories: men and women. Gradually they are transformed into archetypal forms and do not vary tremendously in attitude and dress.

Around the same time, the new city of Athens with apartment blocks begins to appear in the background, usually in linear freehand drawing. At the same time, he paints still life that intensify the relationship to everyday life, and emphasizes the specificity of lifestyle in Greece. He displays the minor but characteristic moments of the Greek summer. Bees, melons, peaches, fish, steamers and everything else that reminds Greece, and in particular the Aegean make its appearance. It is the time that the artist decides to spend his holidays in Kea, which decisively marked the eighth subject matter.

The 1980 starts with the predominance of spot colors, especially blue and quite often of gold (gold leaf), chock sealed within the molds of the bodies, while the dimensions of the paintings  are getting larger, obeying, one would think, the aggressiveness of color, so that we have artworks that are close to a length of 5 meters. Moreover, he starts working with the technique of oil pastel, rich tonal gradations of the same color and in combination with others. Nevertheless, in each time period he passed from one kind of technique and style to another, from the simple to the colored oil drawing, from the monochrome to the   continuously variable tone table in exuberant compositions with full voluptuous figures, and from etchings and serigraphs to working with gold leaf paintings, always, maintaining his personal style no matter the simplicity and complexity of his creations.

The honesty that is profound in his work owes much in his studies of ancient painting and to the teachers of the 30s Generation as well as the relationship with the Shadow Theatre. However, it is also because of the unusual and delicate look with which he gazes the world, a look so personal and determined by his identity, which at least thematically the years he spent in Paris were unable to alter.

Furthermore, since the mid-70s, he was interested in scenography and costume design and designed sets and costumes for classical and contemporary works in public theaters (National theater, GNO) and the free theater. He also dealt with the ancient drama.

His works are in the National Gallery, the Averoff Gallery, the Old Testament Athens, Rhodes, the MMCA, Thessaloniki, in Coll. MIET, the Musee d'Art Mo-derne, Paris etc. He was honored by the French Government the Grand Cross of Knight of Arts and Letters, and was awarded by the Academy of Athens (1999). 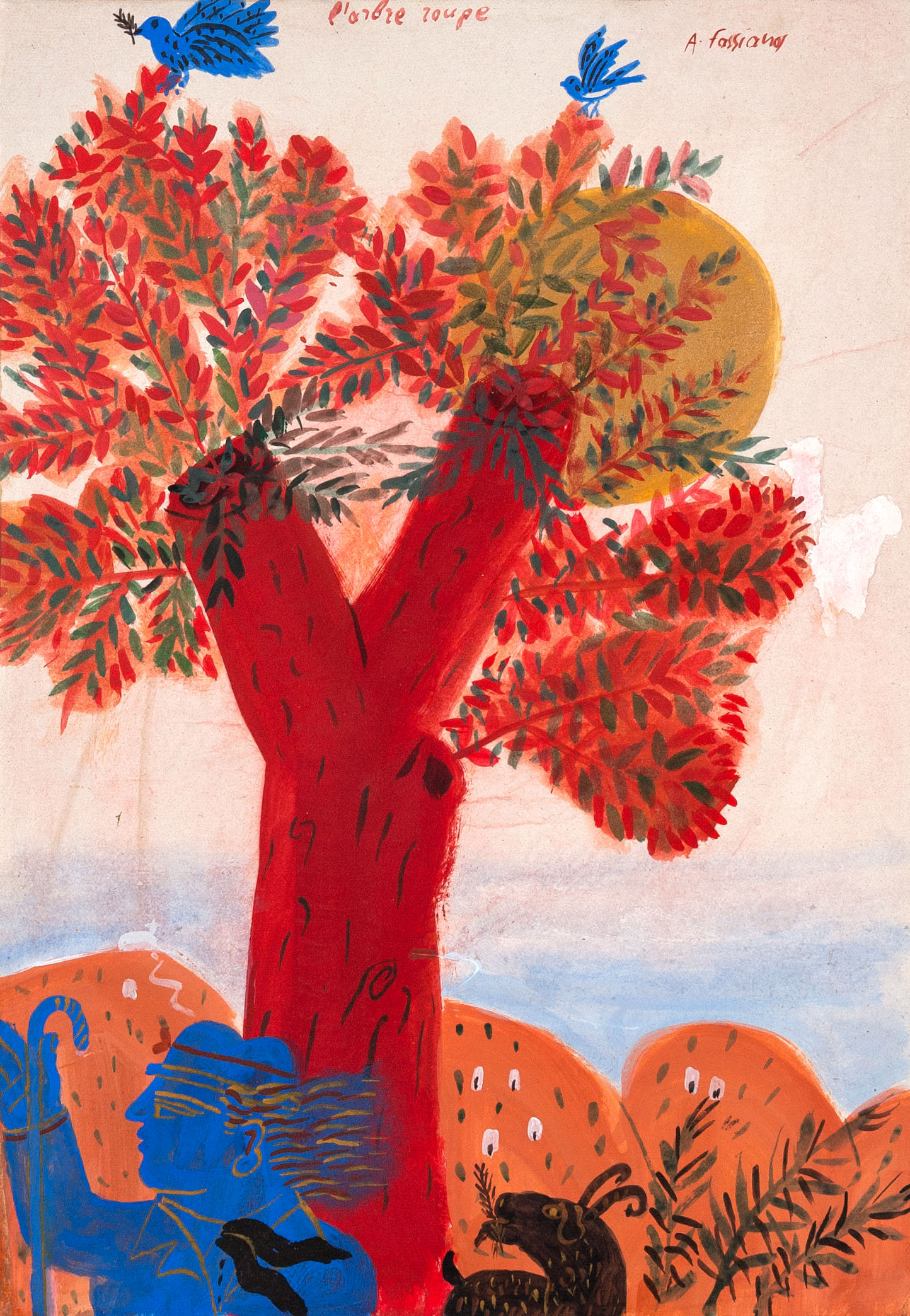 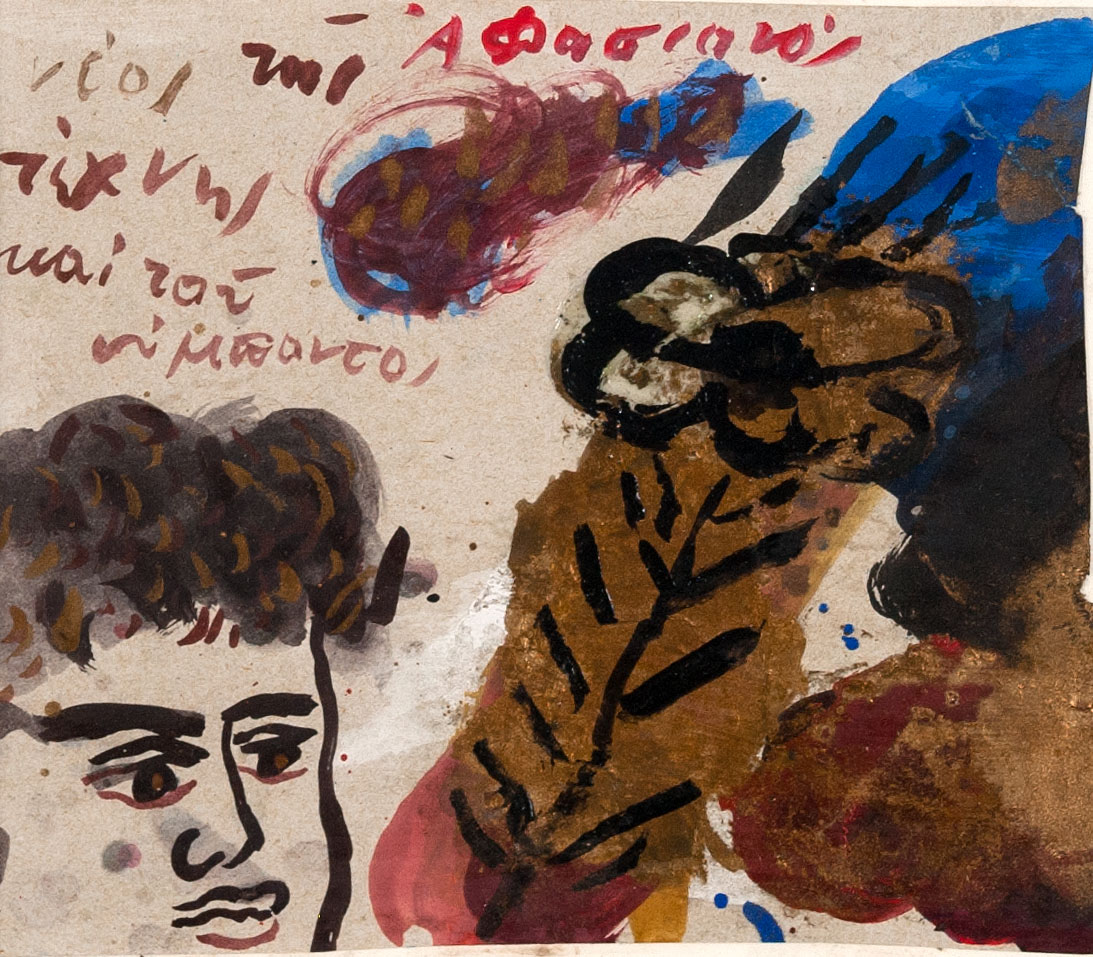 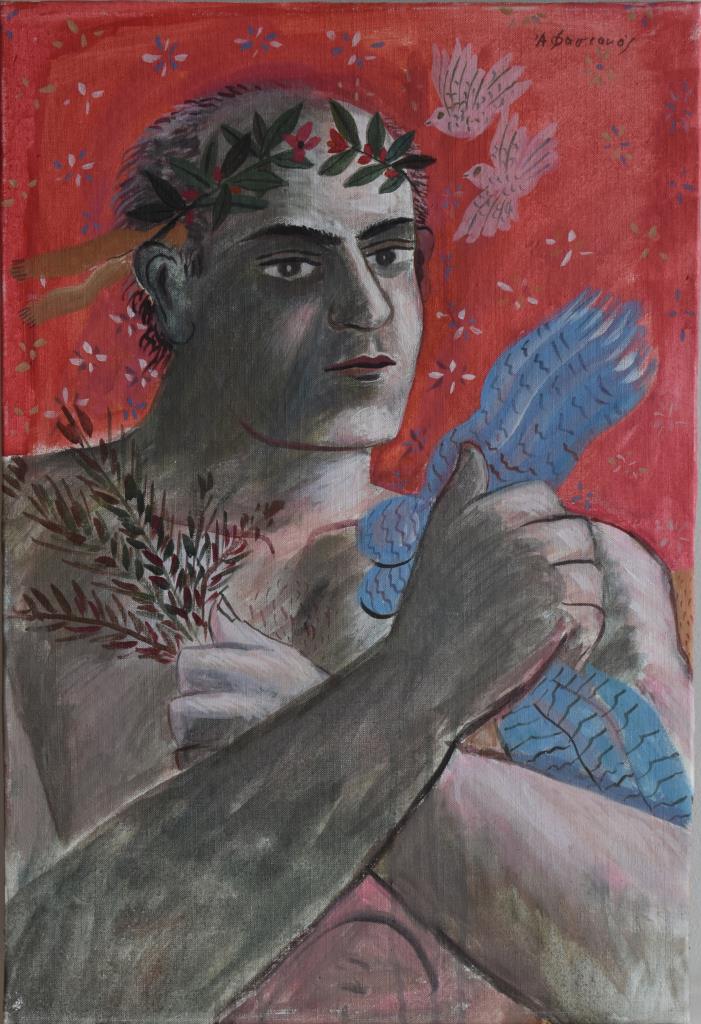 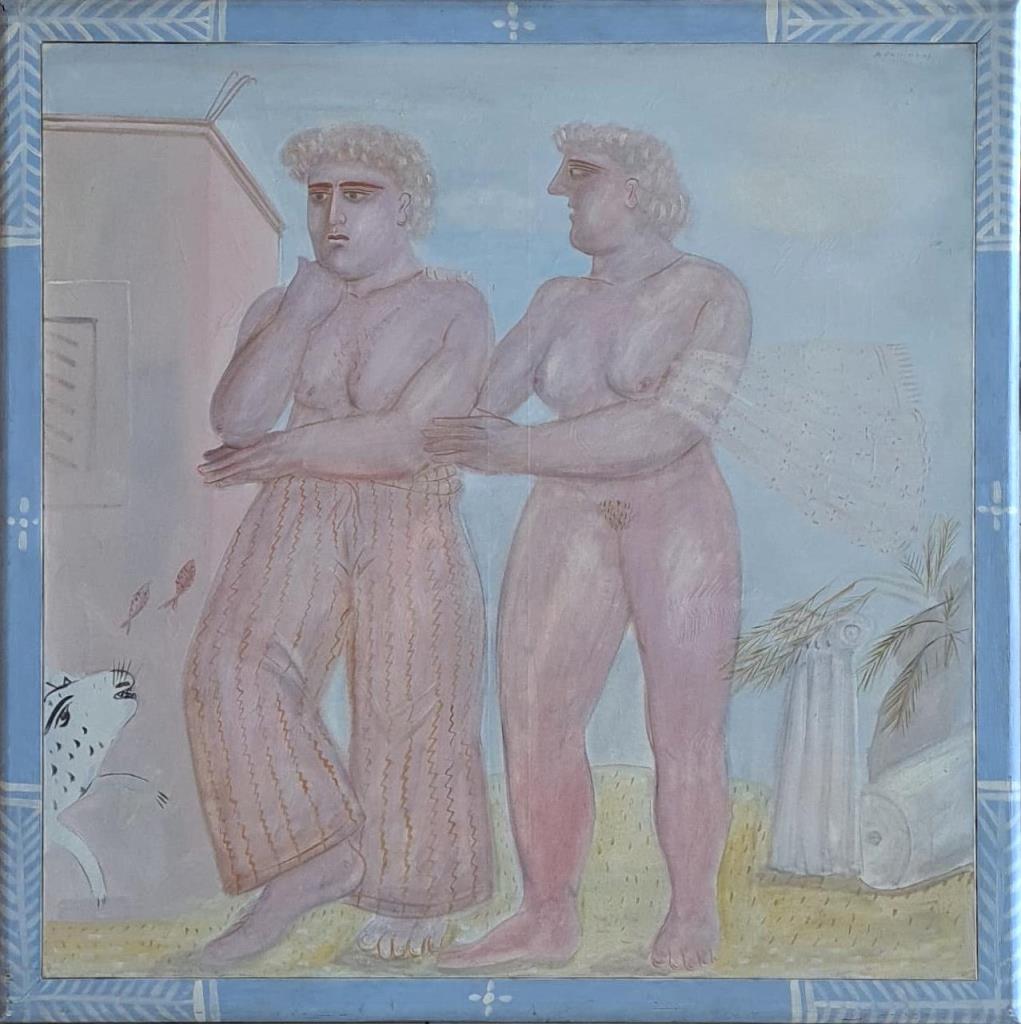 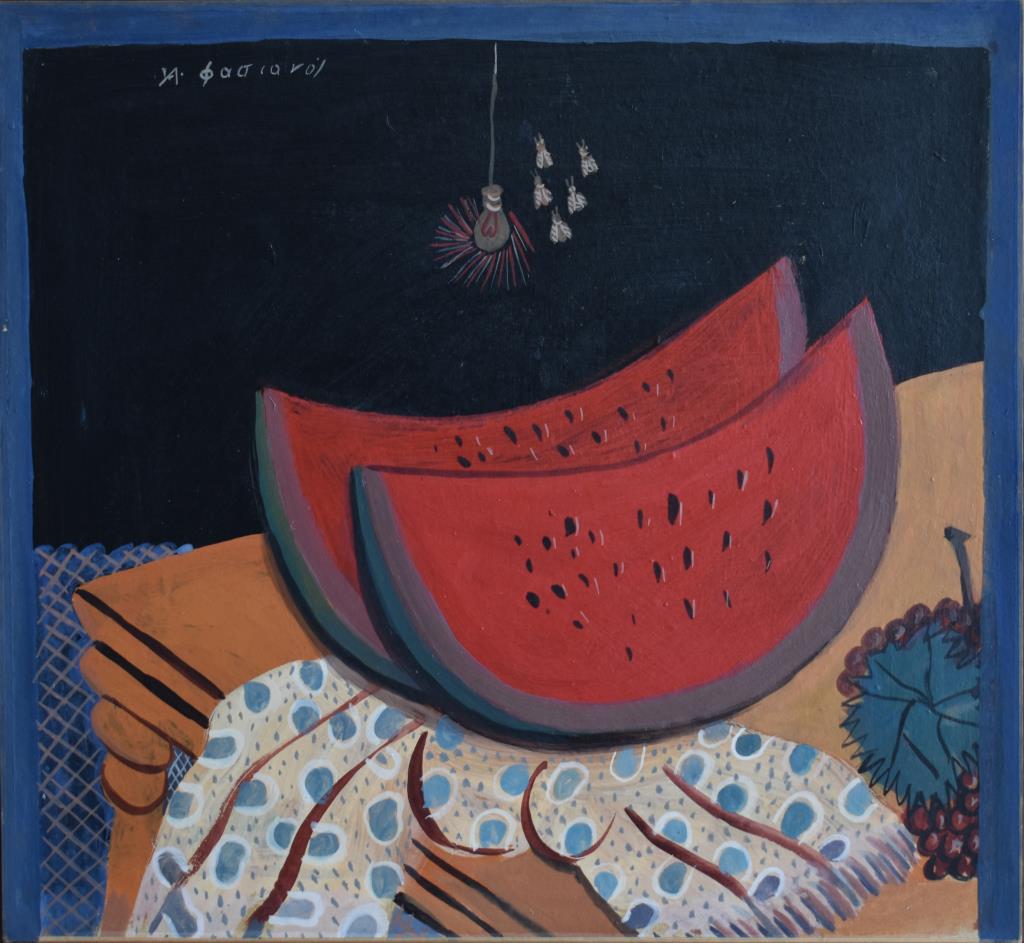 Acrylic on paper attached on canvas 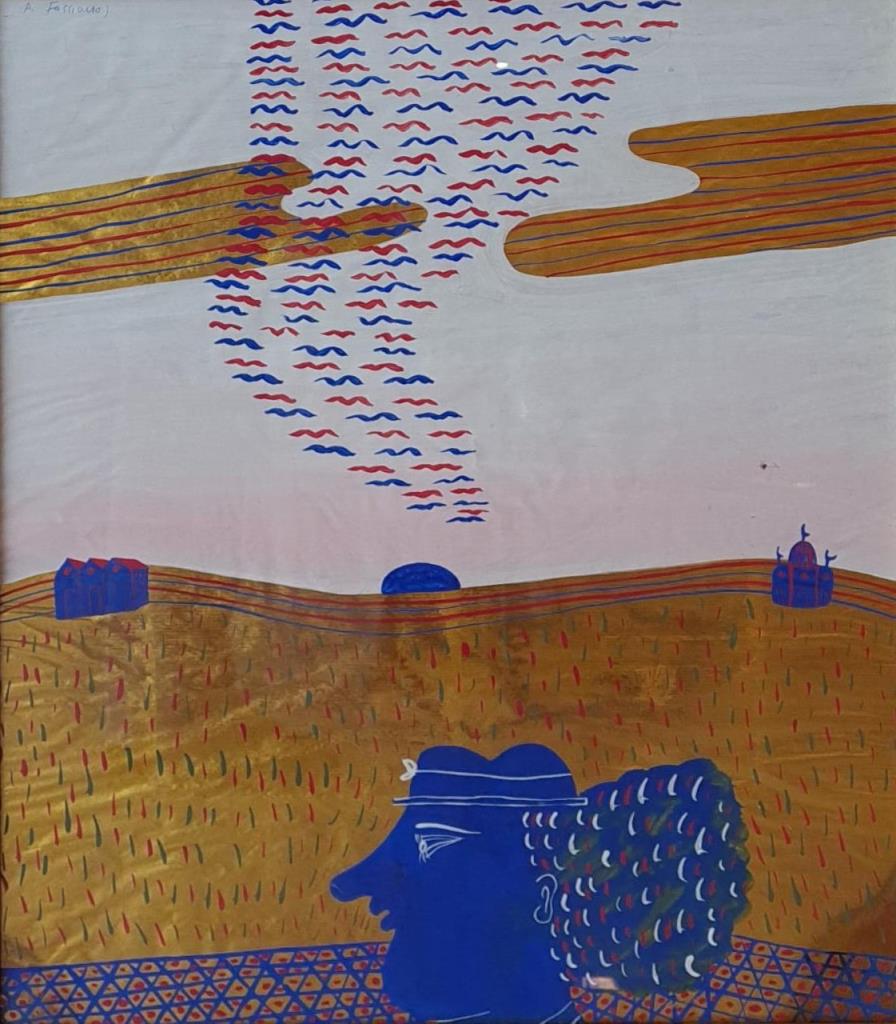